A lot has been changing the last few months for Patrick too - finishing Kinderkrippe after 4.5years, saying goodbye to his friends, going on holiday, turning 5, having a Birthday Party and starting Kindergarten. During his first two weeks at Kindergarten, Markus was also there. The two of them fought and argued apparently. As soon as it was Patrick on his own, the staff noticed that he settled in much better. He has made loads of friends and seems to be quite the centre of attention. He enjoys playing by himself and can focus and concentrate by himself for a long while. I am really enjoying the new group of parents there at Kindergarten and being part of the Enge community.

We have changed swimming, so that it's just Patrick and I on a Friday - and again he concentrates much better during his lesson and really enjoys having time to play and swim with Mummy. We are trying to give him more space and time to do stuff with Mummy or Daddy, without Markus at the moment. 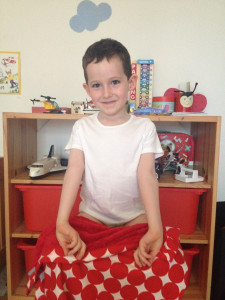