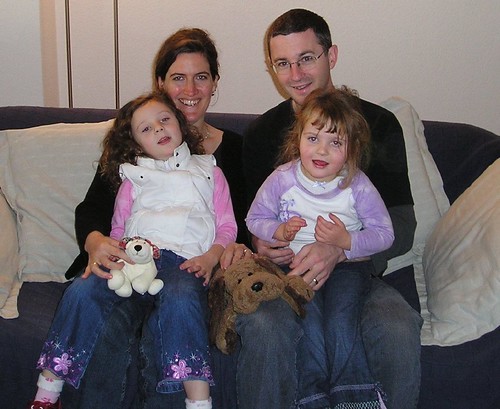 Irene, Emma and Clare have been staying for the past few days, and we have had a ball! They flew over on Thursday afternoon, so I picked them up at the airport and we travelled home via the train and tram. Everyone was a bit tired after the travelling, so we didn't much on Thursday, except for playing games in the flat, including the old favourite - The "Guess who's hiding in the suitcase" game! By the end of the day, my usually tidy and well ordered living room looked like this!

The great excitement on Satuday was the arrival of the first proper snow in Zurich! Before having breakfast we had made snow angels, built a very small snowman (later christened "Roisin the Snowgirl" and thrown lots of snowballs, including a brilliantly aimed one through the open kitchen window to get Mummy as she made breakfast *he he* The girls' wellington boots are a good example of their current pink and purple barbie obsession!

On Saturday afternoon we walked down Bahnhofstrasse and visited the Franz carl Weber toy shop which claims to be the biggest in Europe. This meant I could shadow the girls and buy their Christmas presents. The girls were far more interested in the dragon slide which twists from the main entrance down to the lower floor!

By Friday evening, everyone was exhausted, so we snuggled on the sofa to watch Shrek, and after bath-time, Helen set up her Hair Salon to french plait the girl's hair! The bonus for today was finding a couple of Teddy Bears at the airport, the girls really remembered them from their summer visit! Click here for all the photos!