Last weekend (and actually last week) I really struggled. More times than I care to admit, I lost it with the boys and really yelled at them. Which of course wound them up more, which made them throw things and slam doors all the more. Since then I have worked really hard to get down to their level, speak quietly but firmly, and keep my temper in check. Which sort of works, but actually needs more energy than just yelling at them.

I read this article, which just about nailed it on the head for me. I so rarely get angry, and certainly don't yell at friends, alan, my boss, my friends - so why do I feel it's all right to yell at my boys?
http://www.huffingtonpost.com/lisajo-baker-/when-your-temper-scares-you_b_4057344.html


On the plus side though, three nice things :-)

1. a lovely friend here in ZH sent me the following email, which i would do well to remember
...you are a great mum! your boys don't need a mum who never loses it - they need one who is consistent in her love for them and shows them this even at the end of the most hideous of days - and that is what they have :-)

2. At some point recently, M was giving me a hug and out of the blue said: "Mummy, do you like cuddles too?" :-) #toodamncute

3. I had time on my own with P on Sunday whilst M and nr ncot were out. We had watched "the Gruffalo", then he went off to find the book and I found him on the sofa "telling the story" to his soft toys! Every time he saw character, he would point at the soft toy, then gesture to the page saying "Look, look, mouse" or fox, or whatever! My little bookworm :-) 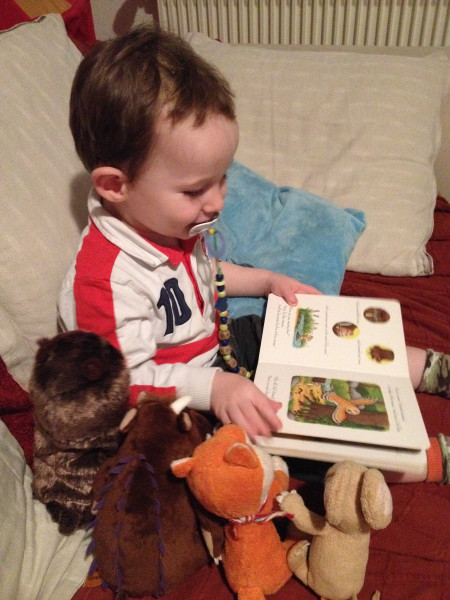