It is now officially impossible to pause the flow of information and questions that is Markus. His speech has made another leap, and he is coming out with long complex thoughts and sentences. We have proper conversations now and we talk about the world we see around us. I tell him something and then an hour later, he tells it back to me, as though he figured it out himself!

The bedtime routine is still tricky. He goes to sleep in our bed (so as not to disturb Patrick) and we move him later, although he will often wake up and walk back to his own bed himself! He also often takes his pyjamas off, as he's falling asleep, so we find him in bed in only his nappy!!

We are going through a storm of emotional temper tantrums. Something sets him off (usually not being "first" or winning) and then it takes ages to get him to calm down. Ignoring him is often the answer.
He is (mostly) very sweet with Patrick and often waits to play with him, show him things. Today I saw Markus instigate the high five and fist bump sequence with Patrick - very cute!
mummy, don't say anything
I don't know either...
I've got a good idea!
Mummy, what did you say? why did you say that?
Mummy, i have to say you something / tell you something
We don't got...
youve got no chance
hold your horses
me fiirst
mummy is a horse ,daddy is a horse, patrick is a horse, markus is a horse
dog / papagei etc
Mummy is a normal train, daddy is an express train, markus is a night train, patrick is an underground train
role play with baby teddy - there there poppet its okay, I will stroke your back like this
baby teddy can't sleep 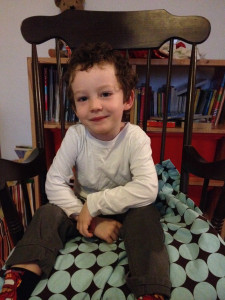 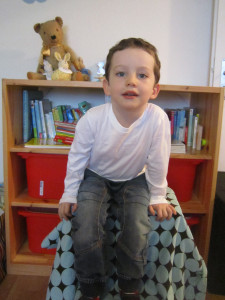