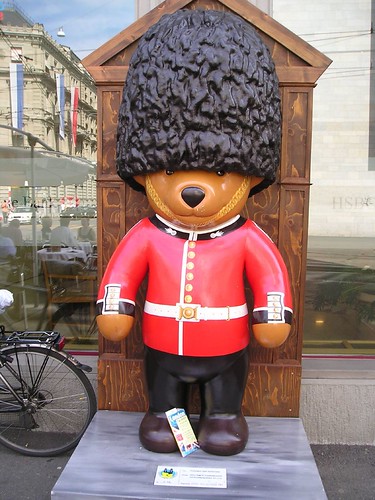 Bookcrossing Bears
If you went down to Zurich this summer, you were in for a big surprise!

If you were in Zurich this summer, you were in for a teddy surprise! Zurich was visited by over 600 teddies in the Teddy Summer 2005 project. We had single bears, bears with children, bears in national costume, cuddly bears, spiky bears, bears who spoke, bears behind glass, bears who moved location and bears who were just plain bizarre! Sadly, the bears have just left their summer homes, and Zurich looks paler without its ursine companions.

It’s well known that bears love books, so this was a perfect bookcrossing release challenge. 18 bookcrossers (including our bookcrossing guest Antof9 from the USA) released 178 books at 156 different teddies and we were rewarded with 34 catches and 15 new members. Many of the new members had heard about bookcrossing in the media and were delighted to find their first wild book! However, at least one findee was slightly suspicious about their gift. KatColorado’s trick of enclosing swiss chocolate with the book prompted one anonymous finder to wonder whether the chocolate and book were poisoned? Happily, they came back next day to pick up the book and lived to tell the tale, taking it to Budapest! Thanks to Zurich’s tourists, many of our books travelled far and wide, including Germany, Prague, Israel and even Singapore!

Congratulations to everyone who took part, but I feel that some honourable mentions should be made for "Services to Teddybear Bookcrossing”! Wildspitz released an amazing 23 books and chalked up the most catches (7) and new members (4). Dolphus released only books with Teddy bear in the title and we had some other great themed releases. For example, Maxmerlot left Ski-Teddy with a comic book about ski-ing. My favourite? Coffeestained left “Idiot Nation” by Michael Moore in the tender care of the Big Apple Teddy!

The highlights of the release challenge for me was leaving two books with the Bride Teddy and the Groom Teddy, (who lived outside a Bridalwear shop, where else?) in honour of my brother’s wedding on August 12th. And my favourite bear? It had to be Paddington goes Switzerland, a little taste of London in Zurich! To view all the Zurich bears who looked after our books, click here!