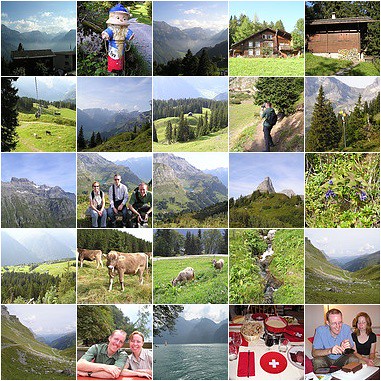 My lovely little bruv Chris and wife Jenn have just left Zürich after staying with us for a week. Last weekend we picked them up from the airport and whisked them off for the magical Swiss tour in a day and a half!

We drove through Zürich, along Zürich lake and almost to the Walensee before turning right and heading towards Glaurus where we stopped for lunch. We reached the Braunwald mountain railway station, parked the car and travelled with the train to the car free village of Braunwald. We checked into the Adrenalin Backpacker's hostel, which was cheap, cheerful and empty and then mooched round the car free village taking photos. We had a typical swiss meal at a nearby hotel restaurant, and were slightly bewildered by the small group of 60-something swiss ladies who were sitting at the table next to us, singing and yodelling with abandon!

On Sunday we took a cable car then a chair lift further up the mountain and then walked back down, which took about 2 hours, including photo stops. The weekend was just beautiful, the weather could not have been better! Picture book swiss countryside - mountains, cows, goats, fire hydrants dressed as dwarves, you name it, we saw it and photographed it!

We (or rather I!) drove the long was home, along the rather terrifying, steep, and fast hair-pinned Klausenpass, which again provided lots of good photos, even if Chris did had to lean out of the window to take them. At one point we came across cows wandering merrily across the road. It was a little bit stomach churning.... especially since the small Vauxhall Corsa was not too handy with the gear changes - maybe because it was loaded with 4 adults and luggage.

We then stopped at Sisikon to visit the William Tell Kapelle on the shores of the Vierwaldstättersee and had a spot of lunch. Siskion also boasts a very large & deafening glockenspiel / carillon tower, which was apparently donated by the "chocolate industry" to the people of Switzerland! We finally got home at about 5ish......