I've spent the last weeks clearing my office space... it's been a rollercoaster ride down memory lane. And since we could only have one box moved, lots of my "stuff" came back to our small flat.
This weekend I have been sorting out :-)

I had HBR magazines from 2006 to the present day, some read, some not. The only way I could get ride of them was to photograph each cover and make an index for myself! It is exhausting being me, with my need to categorize, link and retain everything.... Anyway, I have access to all the digital versions from 2012 in the HBR mobile access app, plus the website contains all the magazine articles from 1956 onwards!. My HBR subscription has supported my through starting working in Switzerland, 2 maternity leaves, promotions, taking over a team. 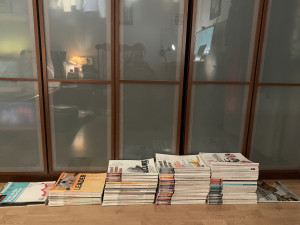 The massive pile of magazines was finally distributed.... I kept a few sentimental copies, Alan chose a few, I gave 2018-2020 to a work friend and then on Saturday struggled to Bücher Brocky with 2006-2017!! But they now all have a new home adn hopefully new readers, and I felt MUCH better to have let go of the stack!

Today I also went through the stack of paperwork and memories that I brought back from work. Cleared up and/or recycled. And now I feel ready for whatever my job brings next!!