Almost exactly a year ago, my parents sold the family home and moved a few miles away to a smaller place. I have written about The Anchorage here and on twitter #anchorage.

Last weekend I returned to Bristol to surprise my parents, who have been living it up and travelling in Australia / NZ for the last three months (baby boomers, what can you do?) I arrived LHR late Sat evening and stayed overnight at Reading Travelodge (oh the glamour!)

My parents now live in a lovely semi-detached house in Mangotsfield, about 3 miles from Frenchay. They sold "the Anchorage" and moved out May last year, but this was the first chance I had to visit them. Since my visit was a surprise, my sister (who as already in Bristol with her boys) had texted me instructions from leaving the motorway. But this invisible force led me. Left the M4 J19 on automatic pilot, M32 J1, and I just had to drive down in Frenchay. It was me going home.

I had had this irrational fear that the house would be torn down, or unrecognizable beyond belief, but I wanted to face me fear and see for myself how it was. I drove slowly past and it was all still there and recognizable. I parked down by the bridge and walked back up the hill and took some shots. There were 2 guys outside and one said (nicely) "There's a lady taking photos of our house!" So I introduced myself and they gave me the full guided tour of the works. I think they were proud of what they had done and wanted an appreciative audience, which I was.

They reckon it will be a few weeks before it is finished. The house felt the same, slightly bigger windows adn more light. They had most of the smaller rooms through, to create much larger, open rooms. The view from my bedroom window was the same as ever and just as relaxing. Seeing the house again closed the circle for me, gave me closure. I felt that I was able to say Goodbye to the house properly.

Sundy and Monday were great. Kate and her boys, my parents and I went out to a lovely old country pub for Sunday lunch. On Monday my parents and I went for a walk around Frenchay and Vassal's park. It was a beautiful, sunny Spring day and the village looked its best. It was lovely to walk down and around memory lane. I can't remember the last time I did that. All in all I felt refreshed and renewed after the weekend, with many fond memories of Frenchay and the Anchorage. I hope that I can provide my boys with the same sort of family home as my parents did.

Row 1, L-R: Built up wall behind house, my room and windows
Row 2, L-R: Downstairs room, outside of house, bridge at bottom of hill 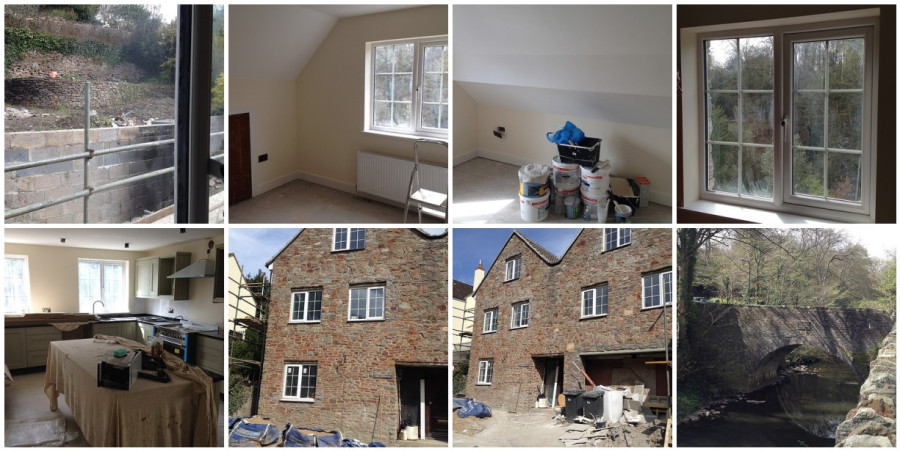 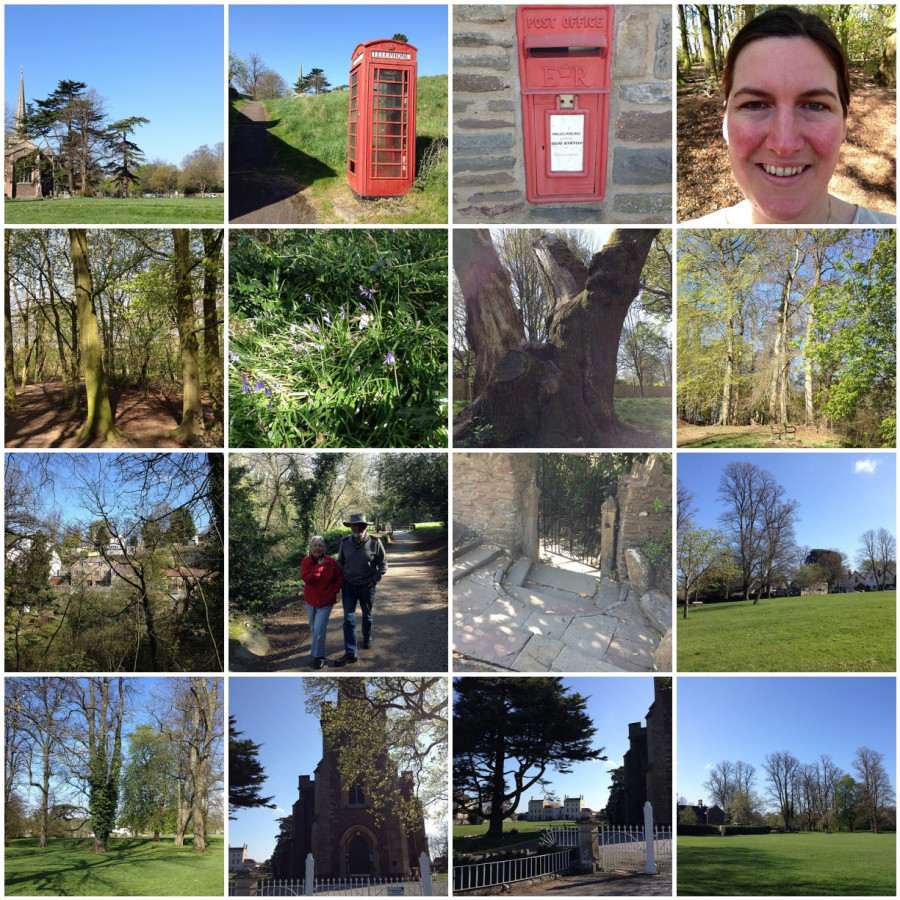 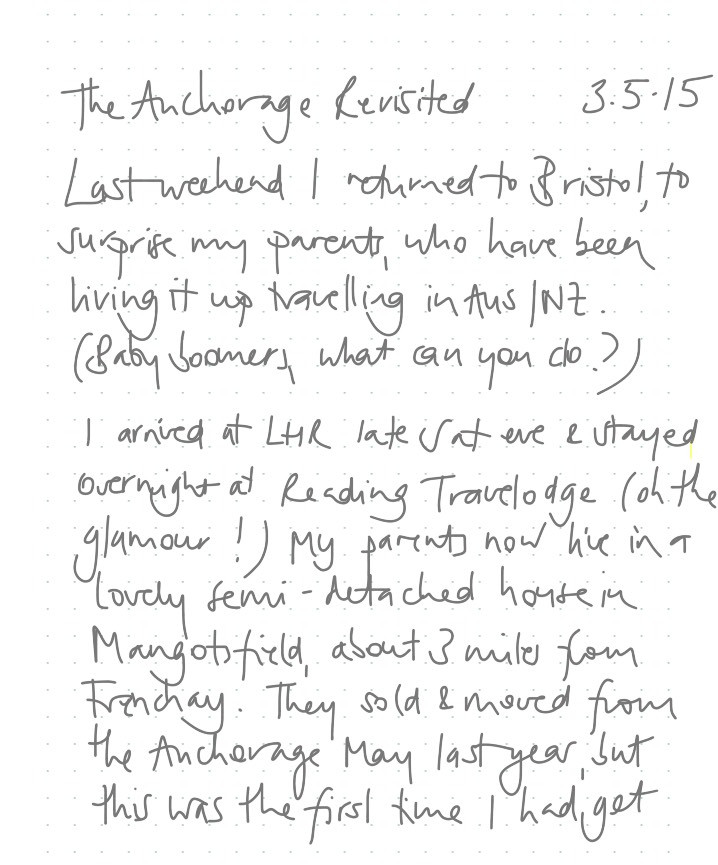 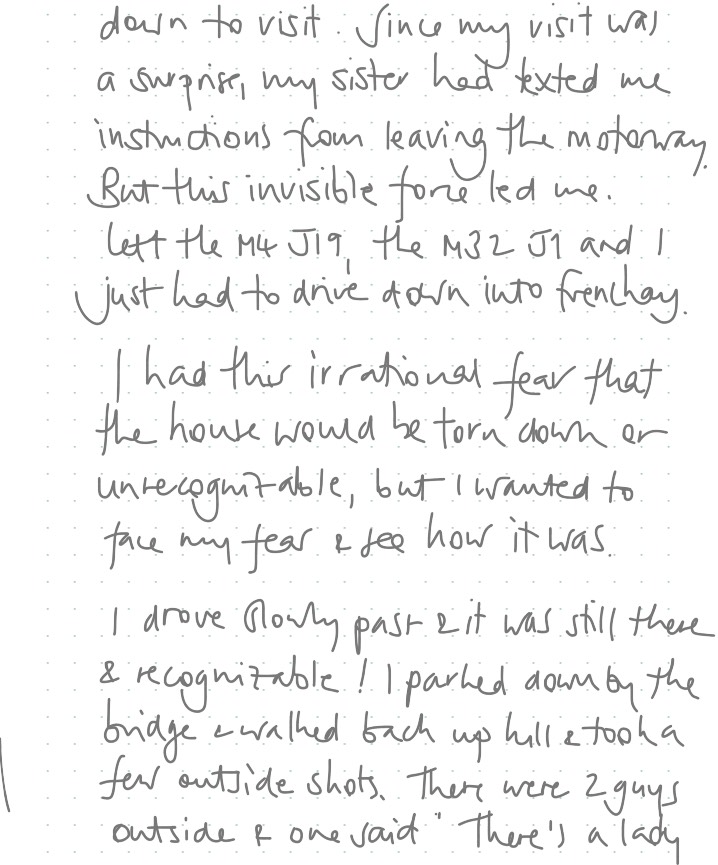 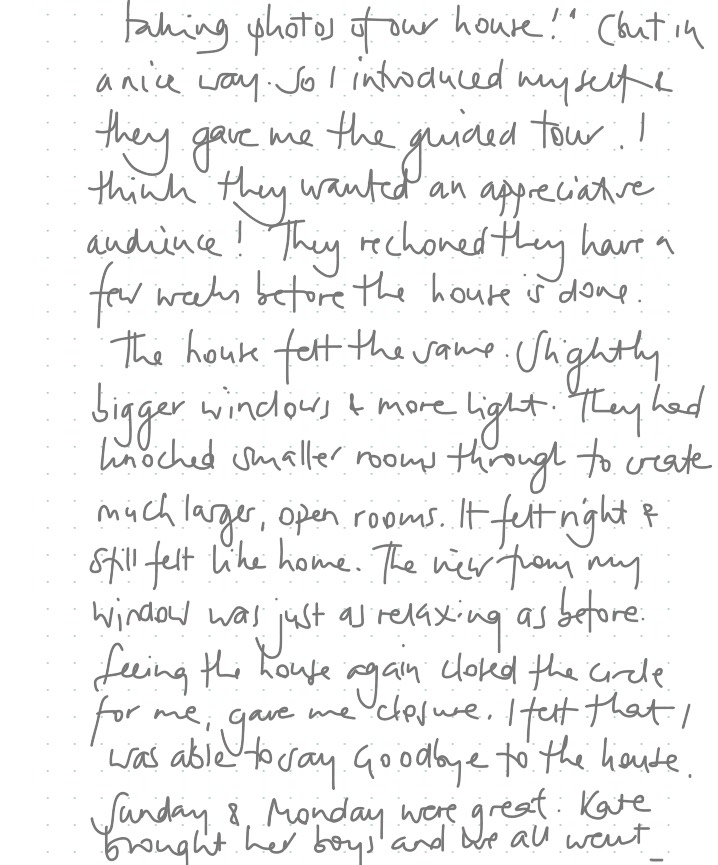 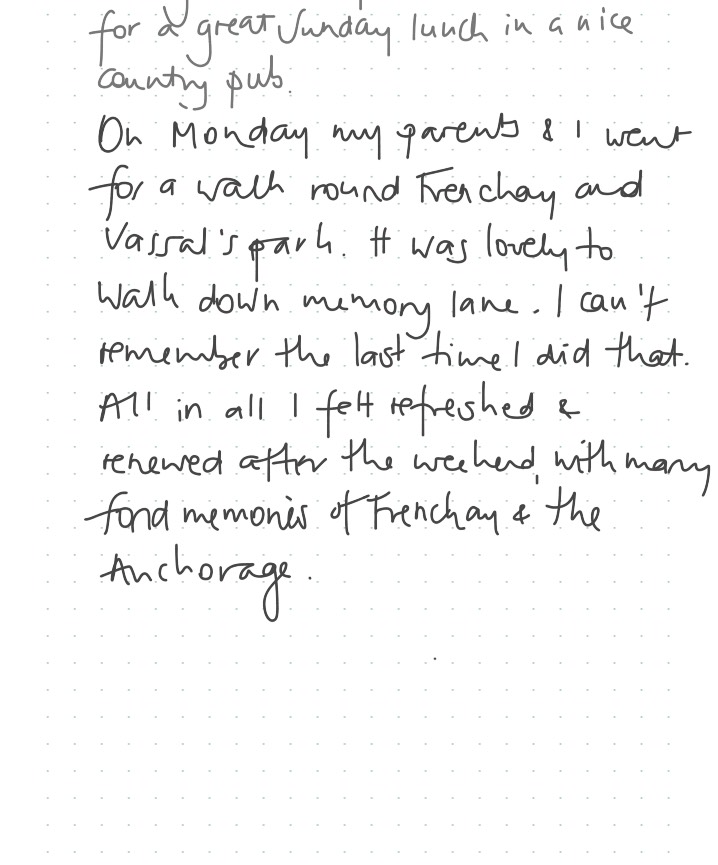 Another 4 months have flown by and Markus is growing in front of our eyes. He has a growth support and a number 2 blade cut (courtesy of Mr.ncot!) He was very happy that he a hair cut like Daddy :)

He speaks fluent swiss german at Kindergarten and a strange hybrid at home, often using German verbs in the middle of an english sentence ie "Patrick is lueging!" (luegen = to lie). Also German phrases translated directly into english ie "I want to draw something out" (ausmalen, de) for "I want to colour something in!" English sentences also often come out with German word order ie "Do we don't have..."
When I hear him speaking swiss german at kindergarten, he is fluent, with perfect pronounciation and he looks and sounds like a different boy. Slightly disconcerting ;-)

He brings new phrases and gestures home from Kindergarten, too. He crosses his arms (like an X) in front of him if something is "verboten". Favourite questions... "How did you know that?" "I didn't notice that" "What does that write?" (ie what does that say) and "How is that called?" (rather than What!)
Oh, and we are just starting the stage of jokes that don't make sense. The intonation, ryhthm, syntax is correct - it's just that they are not funny. 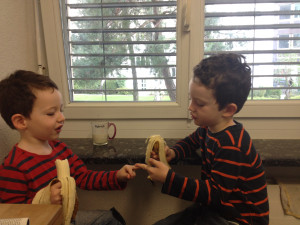 I think they have been teaching them "Rock, paper, scissors" at Kindergarten, except it's called "Schere Stein Papier" (ie scissors, stone, paper) and he has enjoyed teaching Patrick how to play. Noughts and Crosses (Tic Tac Too) is also a favourite, as is "I spy" (by colour) and "I'm thinking of an animal".

I want to say he is getting better at getting to sleep and that he is dry at night, but that would be slightly optimistic. We do have a very cute 5 kiss routine at bedtime. Cheek, cheek, chin, forehead, nose - and if I am very lucky, one for luck.

He loves and fights with Patrick in equal measure. They will place nicely for 10 minutes and then I "feel" the tension rising and then i hear the arguments and the hitting. The Adjudicator is the kitchen timer - most often heard phrase "Markus, you can play with it until the beep beep goes." We have just started in the "That's not fair!" wailing/screeching phase. Why do I never get to... Why does Patrick always,..... etc ad nauseum.

He is enjoying swimming but is not being very challenged at the moment, so i am trying to find him another lesson. He sometimes has drum lessons with his friend Venus on a Saturday. We have also started on playdates with friends from Kindergarten, which is good fun. His favourite thing though is drawing. He is extremely prolific and imaginative. He draws scenes from things he has seen on his favourite films, like the Room on the Broom, or from ipad games. I can't keep up with the scanning and the curating :) He made a mural at Kindergarten by sticking many many A4 pieces of paper together in landscape - it took him days...

I can't believe that we have less than 3 months to go before he starts his second year of kindergarten. I remind myself daily to be mindful of how he is now and at every stage. Each time I blink, he seems a step older and further away. And as the photo below shows, he already looks like his future teenager self. 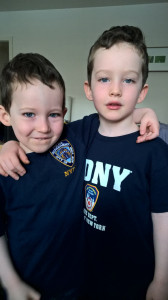 Our Patrick is a funny boy, loud, giggler, takes what he wants, constantly annoys Markus, but then can turn round and be very sweet to him. They are often best buddies, playing nicely together. Markus recently taught him Rock, Paper, Scissors - although we are not sure that Patrick has quite got it yet. He grins at markus, waits to see Markus' choice, and then just copies him :-) He is cheeky but adorable and does get away with a certain amount of mischief. 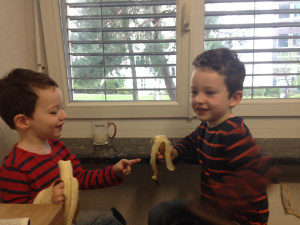 He loves dressing up, and adores the adult 3D movie glasses, heaven knows how he can see out of them well enough to draw. 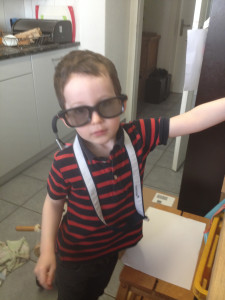 Below is a typical sequence of events - Patrick puts something on his head, looks grumpy, tries not to smile, giggles 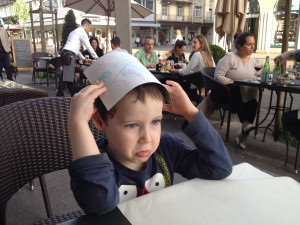 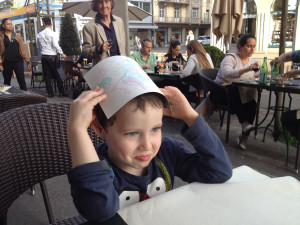 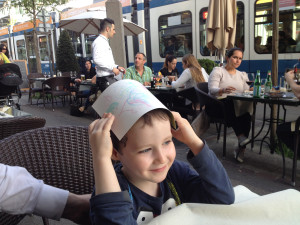 his swiss german is also coming along nicely, as is his "Swiss-english": Me Not! Wait a second (favourite phrase, second only to "But....") He mixes up his prepositions, using "From" when he means "for"
There are some words that he still says in his particular way; pur-rise (for surprise, ie dessert),
airyplane, amimal
me watch funny? = can I watch television?

Patrick is a great fan of the "beep beep" ie the kitchen timer for solving disputes. They can have the toy until the beeper, when the toy is then shared. There is always a race to see who will turn off the beeper -cue more arguments.

He often still naps after lunch. He can do without it, but then he has his five o'clock existential crisis. When he sleeps, it's in the class child pose. He goes to bed with "goat, muggie, pillow". We are still trying to get him to give up the "muggie" (for "nuggi" ie dummy). When he does deign to get into bed (he is the master of many final calls for pee pee, poo poo, more water, more light, less light etc) then the pillow has to be the right way up and correctly aligned. It's like watching a dog circle around and around in the basket before settling! We then have to sign either "twinkle twinkle" or "you are my sunshine" for patrick (with him joining in!) and then "do do do" ie Brahm's lullaby for Markus. He does love his singing!

He loves his swimming even more, he is a right little water baby, and even tries "diving" in the bath. His lessons with First Flow are finishing soon, so i am on the look out for the next type of lessons. 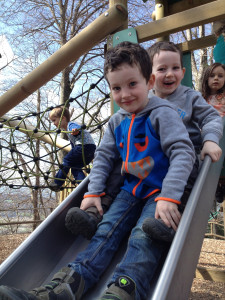 It has been a busy old week between jobs and I have been trying very hard to not just to do tasks, but also get some treats in - see lists below!

I was mostly successful in balancing tasks and treats. I am up to date with photos and blogs. I can see my desk again. Our finances are in order. Patrick's bike tyres are pumped up. It's the little things that make the difference. I now have plucked eyebrows, and nice new gold nails with Shellac :-) I exercised every day and even managed a misty walk on the Uetliberg. Done some thinking about my new job and got some rest. Even did some reading for pleasure! 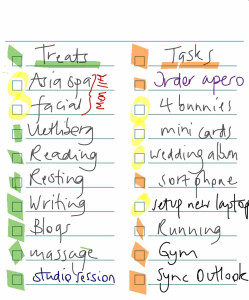 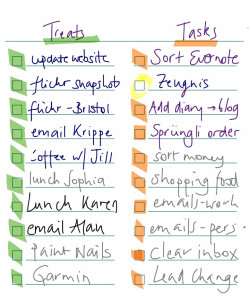 However, my new laptop is still not quite setup and I didn't finish one tasks related to my old job. But hey, who needs 100% completion rate?
My work bag is packed for tomorrow, clothes laid out, Sherlock Holmes omnibus to read on my kindle.

I realized this week though that I finally have all my digital tools lined up, synchronizing and working well.

My digital brain is on Evernote. I can handwrite notes onto my ipad (or iphone) with the Moleskine app or with Penultimate and these notes sync to Evernote. I can even export these notes back into livejournal for a blog post. Plus each note I go to idonethis.com to record what I actually got done. here's today's examples. Helps me recognize that I do get rather a lot done... 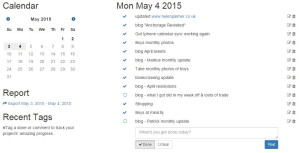 But I have just seen news abot Livescribe who have a real pen and real paper notebooks and yet the smartpen automatically replicates the "analogue" page onto a digital page. They've teamed up with Moleskine and Evernote. A match made in heaven. I want :-)

I just realized I have no tag for all things techie / gadgety / digital :-( How is this possible?
New tag for all my techie woes and joys and wishes! gadgetgirl
Collapse