Yesterday I ran the Bern Grand Prix (10 miler) with my friend / running coach / motivator Katie :-)
This is the longest race I have done this year so far and I was concerned because the course had a 2 hour cut off for the 10 miles and the efficient swiss do like the course to clear on time. I did not want to be swept off the back of the course! This was the first time I had run a race with a cut off and it was a bit nerve racking.

Luckily, Katie and her Garmin forerunner paced us perfectly. Our kilometre splits started off at 6.45 for the first three kilometres (because it was a steep downhill section!) , the next few were between 7 and 7.30, then halfway round I hit my mini wall due to very sunny day (22 degrees), heat, uphill slog in the forest and we went as slow as 8.38. Amazingly we managed to pick up our speed and fight back, with a few quicker ie 7ish kilometres out of the forest, which were slightly downhill. towards the end we levelled off at a few 7.15 to 7.30 kilometres, but then we knew we had to slog our way up the massive hill back to the finish.

The route itself was beautiful, if I could have lifted my head up and enjoyed it, but I really had to fight my way round. The route went down a long hill into the scenic old town of Berne, went along the river aare, into woods, back through the embassy district, before looping again through the old town, past the parliament, through the cobbled avenue streets, before heading out of town back up the hill to the finish. The crowd were fantastic, we had loads of support all the way round, even though we were right at the back of the pack. Plus the music on course was amazing. Even in the woods, there was an accordian player! The swiss organisation was faultless. Excellent race.

However, it was a tough run for me. The stress of knowing that 2 hours was a tight call. Knowing that I was running pretty much at the top end of my limit for 2 hours, plus much hotter weather than I like. I also changed my strategy at the last minute. I was going to run for 10, walk for 1, but was then panicked that this was going to be too slow. So I decided to run, except for the 4 or 5 water stops. This worked okay, but it was a long stretch at the start before having a walking break, and I started too fast. And a few times towards the end, I had to walk.

I really didn't think I was going to get in under 2 hours, but Katie at 13 kilometres knew we could still do it, and took me with her. We ran up (most) of the monster hill to the finish, passed loads of people walking, and had a really really strong sprint finish to the end. I thought I was going to collapse or puke at the end, but recovered quite quickly. When Katie showed me her watch, I didn't believe it, but my official time was texted to me seconds after passing the finish line. 01.59.27. Just goes to show what you can do when you dig in. Katie's motto was "It's a hill, get over it". It also showed me the generosity & hard work needed by an experienced runner to get a slower runner round in under that time. Thanks Katie :-) Next race - half marathon on 2nd June, which will tick off my "half marathon @40 challenge" Might change my strategy though to running 9 mins, walking 1 min and trying to run between 7 and 730 per kilometre, especially since they don't seem to have a cut off time for the half marathon. But now am having a few days break for my poor legs! 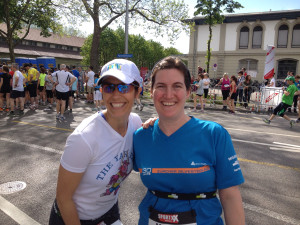 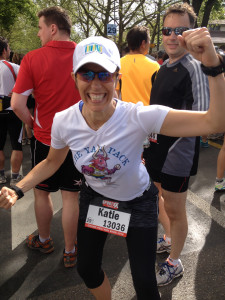 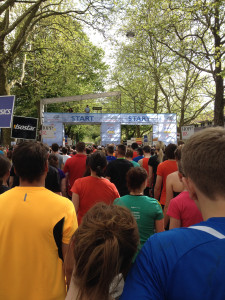 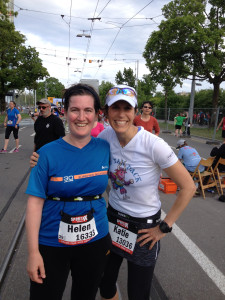 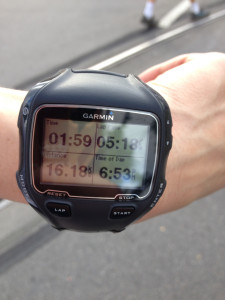