My day at TEDxZurich 2013 on October 2nd 2013 was just wonderful and inspiring! The introverted type that I am, it took some effort to turn up to an event with 500 other people, none of whom I knew. But but the end of the year, i had found two PWG friends, met again a colleague from work, and made two other new contacts. We paid a small fee to be there, but importantly, everyone had to apply for their place. It was a very mixed group of people but the energy was something else :-)

The event was at the SF Studios and was volunteer run. The admin, organisation etc was seamless. There were 15 speakers, of which three were entertainment pieces, there were two recorded TED global talks, and we even had a robot! Here's the Official Review of TEDxZurich 2013.

There were so many brilliant ideas and speakers, but the speakers/topics that stayed with me were Lily Asquith on Higgs Boson, Suzy Moat on predicting future from digital footprints, Ian Livingstone on the importance of computer games, Sean Dromgoole on the future of marketing. For an excellent summary (auf DE), one of my new contacts had posted his blog by the next day! Read more here

The concentrated energy and focus of 500 participants was amazing. We basically sat still and listened for hours. At one point I looked around me and saw people making notes on laptops, in old school notebooks, taking photos and tweeting via iphone. Everyone wanted to record their impressions of the day. The breaks and lunch allowed partipants to discuss the talks heard, what they had learnt, what they would take away with them. It was truly inspiring and motivating. My phone battery and brain nearly ran out at the same time (ie part way through afternoon), but I found reserves from somewhere and the day finished with an apero and more talking!

And here are my moleskin notes from the day. Below are my tweets from the day, which give a good overview of my thoughts on the talks as they happened. Looking at the tweets at #TEDxZurich throughout, it was amazing how consistent the messages were. As participants, we all picked up on a very homogenous set of key points from each speaker. It was great to also be part of the digital twitter community and conversation at the same time as being their in "person". 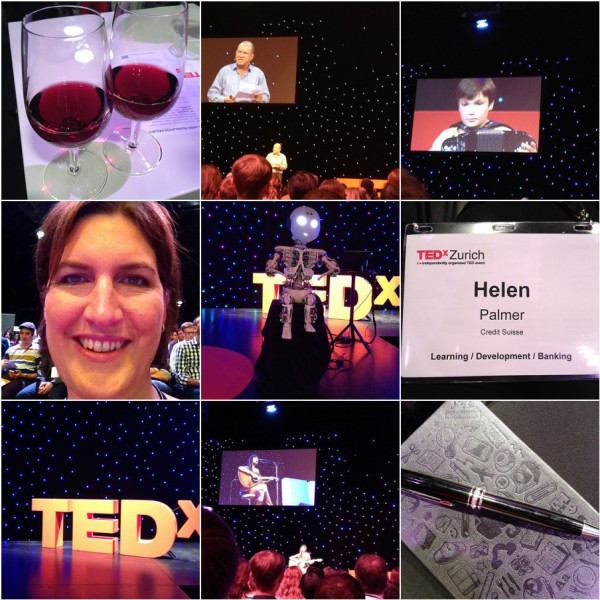 all my photos here