On my recent trip to London, I made a trip to "Run and Become" - my favourite running shop - and bought a new pair of trainers. Well overdue, since the last time I bought new trainers was in 2006! I bought an updated version of my previous pair. Am now the proud owner of some Brooks Adrenalin GTS 13 trainers, costing gbp 100. They even had a QPR code inside! I also discovered that i now take euro size 42 for trainers, ie size 8.5 :-(

Markus keeps telling me that my new trainers will make me run faster :-) I just hope they inspire me to start adn keep on slowly running again. Have got out of the routine the last month or so... 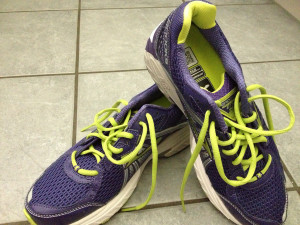 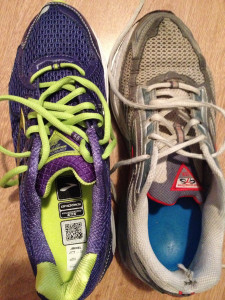 Below, the potted history of all my previous running shoes!
Running Shoes History
2006 - September
New Balance 857 US10 B £70 from Run and Become 2003 - 2005
After the marathon I didn't run for a few years, starting slowly again in London and then Zürich (2003-2005).
These Nike Air (Bowerman Series) were again recommended by Run and Become. Not my best ever trainers, but okay... The problem was I bought them but didn't have my insoles with me, so the fit wasn't exactly perfect. But they got me back into running again. I've just bought 2 new pairs to replace them, so they will soon be going to trainer heaven... 2001
The first trainers I bought from Run and Become were Brooks, can't remember the name, but here's a pic of me wearing them just before the marathon - strangely, Sal my running mate bought exactly the same pair! 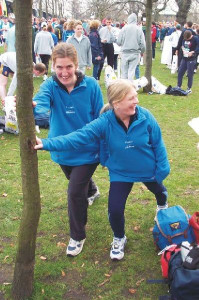