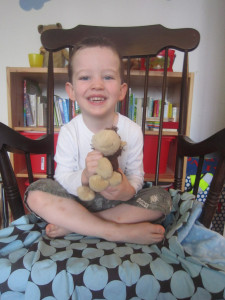 Life with a nearly 4 year old gets easier, Markus is becoming more independant. He scooters ahead of me, but knows to stop well ahead of the roads. He has definite ideas about our routine and what he would like to do. And he is becoming a very lovely big brother to Patrick. He will often fetch things for Patrick, often unasked, ie he brings him his dummy or his teddy bear when Patrick is crying. Yesterday I heard Markus say to Patrick - "Patrick, it's okay, I stay with you" and he stroked his head! He also recently said to him - "Patrick, that was very clever of you. Well done!"

Having said that, he had the biggest tantrum a week ago, cried and sobbed over nothing for nearly an hour, until he finally gave up, sat on my lap, then fell asleep! He is very affectionate and often wants to be picked up and cuddled. He has a sense of humour and the big joke as ever is calling people the wrong names - "Mummy, you're Markus, Patrick you're Daddy..." It gets a bit confusing as to who I am supposed to answer to! He is also very funny if you apologise to him for something, he then says "it's okay Mum, it was only an accident!"

His sense of time now extends to tomorrow (anything in future) or yesterday (anything in recent past. Language wise, he now really understands that everything has two names (ie Eng and Ger) and is constantly asking "Mami, was heisst das?" (ie what's that called). With us he predominantly speaks English, with the occassional sentence or explanation in German. Although in the middle of an english sentence, he will often through in a German conjunction like "wiel" (because) or "und denne..." (and then). He also uses some strange english verbs for things, ie put or make. "Are you going to put me in and pick me up?" "Put it off" (instead of take). Or "Mummy, don't make a photo" (instead of take)

oh, and then birds and bees conversation can't be far off. We have a friend who is pregnant. The other day, apropos nothing, he said "mummy, how does the baby get out?" Hmm... time to find an accurate but age sensitive explanation. 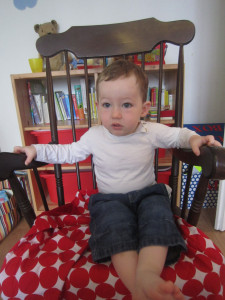 He was very excited in the car during the weekend. Kept saying Mama or Papa, then either "Train!" or "Cow!", even if neither were to be seen. Also learnt the word "tunnel" (very useful when driving through switzerland with small people. The family game is to sing "Tunnel" when you enter the tunnel and keep singing until you reach the other side. Markus didn't want to play, but then we heard a small patrick voice saying "tunnel!"

He is very attached to his big brother and is constantly saying "Mar kuuus?" Has trouble with his k sounds, so it often comes out as "maaarr ffuuuus?"

Oh, and last week (1st July) we had the first pee in the potty. So proud :-) New stickers bought now to decorate the potty. Let the fun commence...

I lived and worked in London for 10 years, but there is something about staying in a nice hotel, going out in the evening with a colleague, which turns me into a complete tourist!