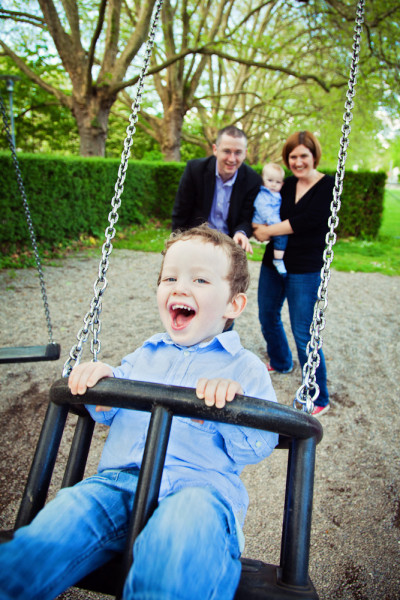 This weekend our genius photographer friend, Claire Pearson, will come to Zurich for our autumn shoot. I am sure it will be lots of fun, now that Patrick is so mobile :-)

In the meantime, here are the best of the pic from our family spring shoot in May 2012

All of our shoots, from being pregnant with Markus, to now! 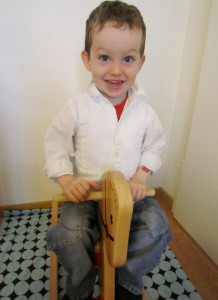 This month I had to bribe Markus to have his photo taken - I showed him a slide show of him every month from birth to now and then he was so excited, that he lept onto the rocking horse!

During September he said his first spontaneous "i love you" to me and the WHY phase has started, although Markus prefers the german "Warum?" followed by "Was ist das?" (what is that). His language is really improving (list of words and phrases below) and he is talking more fluently, making more sense and the other day we had a proper telephone conversation :-)

The fighting and fraternal alteractions are increasing. He can be very sweet to Patrick, but mostly he shouts at him, kicks and won't let him play with his toys. "Mieni"! ("mine", followed by sweeping arm that protects his toys).

Games
We are together inventing more games to play with him and he is independantly making up more role plays and acting out story lines from DVDs. One favourite is to play hide and seek with our landline phone (there is a button the base station that allows you to "ring" the phone!). Markus makes up fantasy families and calls us Papa Bear, Mama Bear etc. In the kitchen we play wibbly wobbly bridge - I sit on one stool with my legs on the other stool and he crawls along my legs, with me wibbling him. He hasn't fallen yet, but surely it's only a matter of time!

On the iphone he likes the counting bees game, an animated A to Z (the music drives me crazy! and the hungry caterpillar counting game.

Words and phrases
It's only water!
Me is hungry / tired / quick
likkle likkle (with finger action)
leave the door open it
broken-ed
I show you Mummy
Mummy, where are you going?
Mummy, what are you doing?
that is funny
Special special orange juice (orange or red orange squash)
orange juice with big big bubbles
Mummy cereal (all bran)
daddy cereal (special K)
weetabix
Mummy yoghurt (natural yoghurt with jam)
bitte hold this on a minute
banana moon (ie crescent moon) 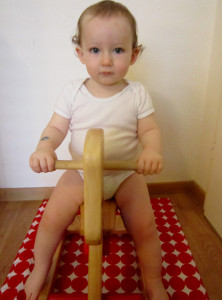 Patrick is just getting so cute. He smiles and wrinkles his nose. Continues to play peek a boo, particularly when is lying on changing table. His is babbling a lot more, and he and Markus "communicate" with each other, after a fashion. Mostly in screeches and in uh-ohs.

He is so mobile and is determined to climb onto everything. And can move remarkably fast, particularly towards an open door, which should be closed! He can (with a little bit of support) now climb up onto the sofa and also up onto our bed.

In the last few weeks he has turned into devil child in teh evening, crying and screeching and not wanting to go to bed :-( Eats everything in sight and is using spoon well.

We went to Doctors this week for 15 month check and he is 12kg! 75% for weight, 50% for height and head circumference. 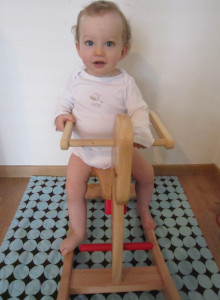 Have just been comparing my boys at 15 months - how cute are they? :-)
Collapse