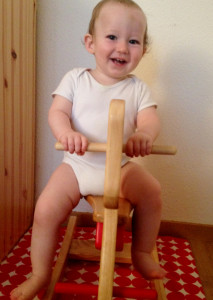 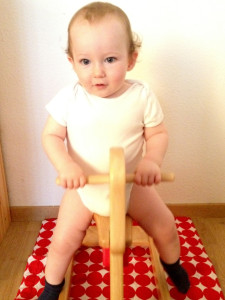 Patrick started walking at 13 months and since then, life has got more challenging! His Frankenstein swagger (arms up for counterbalance) is hilarious, but a month later is getting less pronounced. He still crawls when he wants to get somewhere fast. And his helpful older brother often takes him by the hand and pulls him to his destination! The joy of him walking is that he will toddler over to my open arms and lean into me for a cuddle - bliss.

He is clapping and pointing with the best of them, and has started to initaite "peekaboo" by putting a tea towel over his head when in the high chair! He can feed himself with a spoon, sort of, but then helpfully tries to feed Mummy as well. He is very adept at eating with his fingers and has a very fine pincer movement. He likes having his little fingers nibbled and often sticks them in my mouth, particularly when I am giving him his bottle. The big news is that he weaned himself off the breastfeeding a week or so back, and now just takes a bottle.

He is still in a biting phase. He will snuggle into your neck for cuddle and then go in for a vampire bite, which is rather unpleasant. He tries to put his shoes and socks on, definitely know what should be happening, even if his motor skills aren't up to it yet. His hair is getting a bit tufty over his ears and is getting a bit wavy - he still seems to have a lot less hair than Markus did at the same point though. Still not sleeping very reliably. Sometimes he sleeps through, but often wakes at 4ish or 6ish for a bottle.
Collapse