I made a revelation today. I managed to run my standard route (just over 4 miles, 53.27) and actually found a comfortable pace. Instead of listneing to music, which means I alter my speed according to the song (without realizing) I listened to a podcast. I was suitable distracted and managed to slip into an easy pace which I could keep up. PLUS I didn't stop or walk once.

My best mate Sal arrives on Friday afternoon and our run is on Saturday - go us! It won't be the fastest 10k for me, but I will run all the way! 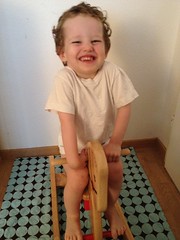 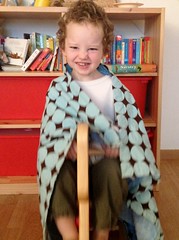 month 37
Originally uploaded by nice_cup_of_tea
I seriously cannot believe that Markus is three - I keep looking round for a toddler and seeing a small boy before me!

This week he told his first lie and made up his first joke :-) There was shouting and food throwing going on in the kitchen. As I walked in, the floor was full of food. I asked him who had thrown the food and with a straight face he said "Patrick". When I asked again he grinned and said Markus! One night recently I was tucking Markus in and talking with him about his toys Dog and Monkey (we are imaginative with names that way!). I mistakenly said Donkey and markus roared with laughter, saying "Who is donkey?" Now we just have to say Donkey and it starts him off again. Yes I know, easy to make a 3 year old laugh.

He is talking more now, longer sentences and more imaginative speech. The other night we had a stream of consciousness for about 10 minutes. Its still hard to understand everything he's saying, but he seemed to be telling me about his day, or perhaps a dream he had.

month 36
Originally uploaded by nice_cup_of_tea
In other news, he has been given a "like a bike" by Uncle Chris and Drew. It's a balance bike without peddles and he can get up a real speed on it. I have to really hold back and let him figure it out. He is also obsessed with spiders (mostly because the flat has a few corners with cobwebs in!), but also because the shared hall way has a lot of spiders and daddy long legs lurking in corners and on the ceiling. For some reason he is convinced that we are not to wake the spiders, so when we come in, he starts shushing and saying "spiders asleep!" However, he normally breaks down and then yells "Wake up spiders" before we are in our front door.

He loves singing, and will start singing his favourite songs on his own, sometimes making up his nonsense words to go with the tune. He has been singing happy birthday for weeks and if he sees a candle anywhere, he has a pavlovian reaction and starts singing Happy Birthday again! He is also "helping" Patrick with his walking, but holding his hand and leading him along - sometimes not so gently or slowly. And his most common conversations with Patrick go like this "no biting patrick!" "no throwing food patrick!" He can now count to ten, fairly reliably, and will count himself in on three before doing something. 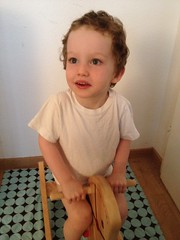