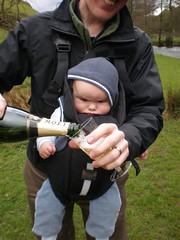 2008_04_28 Drew & Champagne
Originally uploaded by nice_cup_of_tea
Drew's Naming ceremony, led by a humanist Registrar, was fantastic. Jenn had chosen a spot by a river in Dovedale, in the Peak District.

The ceremony was about 20 minutes long and emphasized that children get to choose their own faith later on. Chris and Jenn spoke about their commitment to Drew. Both Grandmothers also had a reading and all of us took part in a poem at the end. It was a such a joyful occasion! We all drank champagne and toasted Drew. Later we had a pub meal, gave Drew his presents and he was passed round the table during the evening - everyone gave him a little cuddle, but only Kate could get him to sleep!