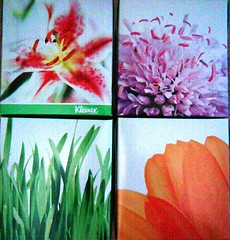 2008_04_04
Originally uploaded by nice_cup_of_tea
Life in the beehive, along with the other 5,500 cs drones strikes me as strange, every now and again!

I was walking back into the office after a meeting in town and as I got off the tram and walked with everyone else, it struck me how everyone has a "uniform" and signals their membership of a certain subgroup.

Most people off the tram were men, mostly suited and booted - as was I. In front of me were 2 youngsters, can't have been older than early twenties, dressed in low slung jeans. IT people and the back office staff stand out by their informal clothes. The Uethlihof doesn't house many of the front office staff, but they are always very smartly suited.

And then later on today, something else struck me. I was in a meeting, where most people attend physically, with a handful dialling in. We figure out that there are all German speakers present and off the meeting starts, in swiss German. Then someone else joins, who isn't fluent, so we switch up to High German. And then an american voice comes on the line and barks "Don't understand, speak English."

And as if at the flick of a switch, we all start speaking English. For one person. And what amazed me more, was that he didn't even acknowledge this.....
Collapse