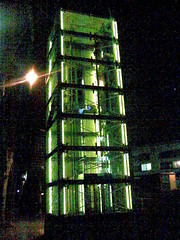 Mr.ncot and I went out to RiffRaff, the trendy cinema on Langstrasse (trendy bit of Zurich) and saw the most wondeful film - The Band's Visit. Impossible to accurately explain, about it was just truly heart touching. About love, friendship, the gap between cultures and music. If it's showing at a cinema near you, then absolutely go and see it! I would say that it is one of the best films I have ever seen :-)
Collapse