May is turning out to be a corker of a Month. After the Birthday celebrations and the dissertation celebrations, we now have the "Helen's got a job" celebrations !!!

Remember the swiss bank saga that I was writing about in April? It's been going on since then, but I didn't want to be constantly updating it. In a nutshell, they suddenly didn't have a permanent job to offer me, but offered me a one year contract. Since I liked the job and the team, I thought this was a good compromise and I think the chances are very good that the job will either be made permanent, or that I'll find something else at the company.

Basically, they verbally offered me the one year contract about a month ago and I verbally agreed to the terms and conditions. And since then I've been waiting and waiting, because they need 2 signatures further up the food chain! The nice HR woman rang me on Thursday to say it was official and that the contract was in the post (hoping I'll receive it on Monday) and my boss-to-be rang me on Friday to say that they were really happy that I had accepted and were looking forward to me starting.

Because it's dragged on for so long, I didn't feel ecstatic when I heard the news, but now I feel content and happy, tempered with a fairly huge whack of nerves and excitement. But that's normal, right? I start on Tuesday 6th June (ie 06.06.2006, good huh!) and am going to Dresden next week (Thurs to Sat) followed by a trip to Manchester to see my sister on Sun to Weds. I start the following Tuesday.

I don't want to reveal the name of the company, since I'm sure I will be writing some blogs about my new job, but it's a large swiss bank which isn't UBS and the photo might also give you a clue :-) Thanks to all my lj friends for your support, advice and encouragement whilst I was job hunting !! We had a wonderful evening last night :-) The wonderful mr.ncot spent almost all day preparing the chicken basmati (my contribution was washing the rice, making the raita and preparing the mango smoothie!) and we went round to

katcolorado & family laden with food and champagne. It was so nice to celebrate getting a job with friends, especially since

katcolorado helped me so much, checking my cv and covering letters, practising my interview German, scanning documents and generally being supportive and encouraging. The kids were a bit shy to start off with, esp. with mr.ncot, but by the time they went to bed, Yannick particularly was crawling all over him :-) And I got to clean Antonio's teeth, particularly unspectacularly I must add. I could hear her thinking "Amateur! where's mum ?"

The food was delicious and Yannick devoured the mango smoothie with gusto. The film was great and we felt well bollywood-ed! My sister has her Masters recital on May 30th – she plays for 90 minutes and I think the marks are a third of her final degree. She’s been practising for this all year!

After some ummming and ahhing, I have finally decided to go, especially since I know I now have a job to come back to! I’ve booked the air tickets and am going on Sun 28th and coming back on Weds 31st May. Hurrah for clever little sisters :-) and hurrah for a trip to Manchester and a chance to do a bit of pre-job shopping !! And I also get to catch up with the rest of the ncot clan... 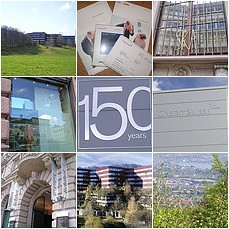 More clues about my new employer :-)

Note to self: whenever I doubt my ability to do something and whenever my natural pessimism threatens to overwhelm me, I will lift up mine eyes to the noticeboard to see my three champagne corks....