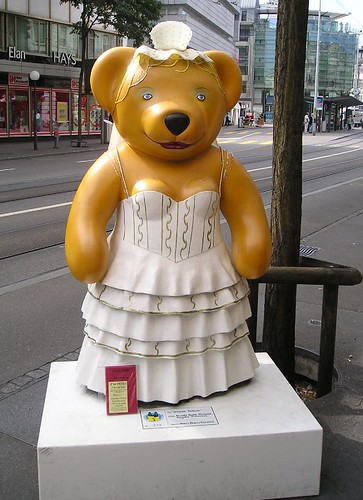 My article on Zurich's bookcrossing bears was in this week's Bookcrossing.com News and Whatnot and I'm thrilled! Thanks to the newsletter editors who said "Yes"! What shall I write about next? :-)

katcolorado's idea of releasing books in Coop Stores so that we could capitalise on the Coop Bookcrossing Article! (ed: Apparently, the original idea was from pfiffigunde2!)

I went to the Birmensdorferstrasse Coop and found a copy of the free newspaper. I opened it to the right page and put it on the packing table area, then placed both books next to the page, took a quick photo and made my speedy exit :-) Here's hoping we get some catches and some new members.

Got some more media exposure today, this time on the Jim Hawkins programme on BBC Shropshire. There’s a bookcrossing update each Friday at 11am, and my email got read out!

Hi Jim, Here in Zuerich we’ve just had an article in the local free (Coop) newspaper. The journalist followed two bookcrossers as they released books and then interviewed the people that picked them up, this was in May. She also came to one of our monthly meetups. I’m off in a minute to release some books in my local Coop – I’m going to open the newspaper to the right page, then leave the book on top! We’re hoping that the article will get some new members :-) Cheers nice-cup-of-tea
Collapse